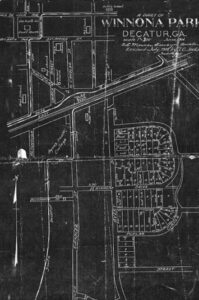 Winnona Park is a historic neighborhood and proud that, through its nomination and subsequent approval of its application in 2002, it was added to the National Register of Historic Places. This prestige is earned through the community’s strong architecture and historical homes and buildings that still exist today.  It consists of some 700 households located in the southeastern area of the City of Decatur, Georgia. Decatur was incorporated in 1823 as the county seat of the newly created DeKalb County – two decades before the Georgia Railroad chose a site six miles to the west as the terminus of its new railroad. The “Terminus” settlement, later incorporated as Marthasville, eventually grew up to become the city of Atlanta.

In 1907, the town annexed the areas then known as “greater Decatur ,” which included the land that was being developed as Winnona Park. The 1910s and 1920s marked a period of much residential development in Decatur, fueled by the establishment of streetcar (trolley) service and automobile routes to Atlanta. During this period, Decatur publicly opted to promote its residential qualities rather than trying to attract commercial or industrial enterprises like Atlanta and other nearby smaller towns. It is a theme that still persists today in Decatur, whose city logo promotes it as a community of homes, schools and churches.

Winnona Park itself had its beginnings in the early 1900s when George Bucher Scott (of the Scott family that founded nearby Agnes Scott College and Scottdale Mills) acquired land from Dr. James C. Avary to develop and build the neighborhood. Scott named the new development Winnona Park in honor of his wife’s family, the Winns.  An advertisement in a 1912 edition of the Decatur New Era newspaper promoted Winnona Park as “the Druid Hills of Decatur ” and ” Atlanta’s most beautiful neighborhood.”

One of the earliest structures in the developing Winnona Park area was the Decatur Athletic Club, built in 1915 and located on Avery Street near Winnona Drive.  The club had a pool, tennis courts and a dance floor.

At about the same time the first homes and a recreational facility were being built, Joseph Hughey purchased a lot on East College Avenue at South Candler Street in 1913 for the area’s first business district. He reportedly operated a drug store; the site was also the location of a streetcar waiting station and was adjacent to the Decatur train depot and Agnes Scott College. Hughey’s business area is now the location of the business strip that currently houses Trackside Tavern, 5th Earl Diner, and children’s clothing and gift store, Wiggles.

In 1923, construction was begun on Winnona Park School.  The school opened its doors at 510 Avery Street on Sept. 17, 1924, with six grammar school grades for 175 students.  Today Winnona School remains very much a neighborhood school, serving about 250 students in kindergarten through fifth grade. Its property includes a large playing field, basketball courts, and a creek-side playground that also serve as a neighborhood park.

The original Winnona Park neighborhood was identified as the youngest of four historical areas in South Decatur by a survey conducted by Darlene Roth & Associates, Inc., for the city of Decatur in 1987. Though the school and the homes on Avery Street , Winnona Drive and Poplar Circle are considered historic, they have not yet received any official historical designation. According to the survey, the area contains excellent examples of English country-style houses, including English Vernacular Revival, Craftsman bungalows and Georgian Revival bungalows. Several homes, including 203 and 306 Avery, are the designs of well-known Atlanta architect Leila Ross Wilburn.

The present-day Winnona Park neighborhood is roughly bordered by East College Avenue and the railroad tracks on the north, South Columbia Drive (and Columbia Theological Seminary and the Methodist Children’s Home) on the east, Kirk Road (with the Mimosa and Candler Oaks areas extending south off Kirk) on the south, and South Candler (and Agnes Scott College) on the west.

The most common housing style in these areas is the Minimal Traditional, a diluted or pared-down version of earlier English Country styles, with some Tudoresque details. “The fact that the preference for English-styled homes (and street names) persisted after its popularity had waned nationally is locally significant and suggests some important regional variations from national architectural patterns,” notes the 1987 Roth study concerning this area.

Before Winnona: the Civil War

The area that is now Winnona Park was undoubtedly the site of much fighting and military staging during the Civil War. An 1864 map of Decatur shows a line of federal trenches extending across the south side of the railroad tracks from what is now South Columbia west to about Adams Street. Reportedly, the trenches were rather hastily dug when Union General Schofield and the Army of the Ohio forcefully occupied Decatur in July 1864. Their primary target in Decatur was the railroad.

Confederate cavalry under General Wheeler succeeded in driving the federal soldiers from their trenches north through Decatur and out to the cemetery. However, when Confederate Gen. Hardee’s troops, who were supposed to rendezvous with Wheeler’s men in Decatur, needed help against Union Gen. McPherson’s army, Wheeler gave up his gains in Decatur to rally to Hardee’s support. When Decatur yielded, Atlanta was next – leading to the Battle of Atlanta a few days later.

Many of Winnona Park’s streets bear the names of local families who were early settlers in the area.

Avery Street: The neighborhood entrance street off East College was named for Dr. James C. Avary, who settled in the area before the Civil War and whose 1868 farmhouse still stands on South Columbia Drive. (An 1860 list of slave holders in DeKalb County notes that he owned 19 slaves.) The Avary-Fulton House is believed to be the oldest standing house in south Decatur and is still owned by the Fulton family, who acquired it later in the century.

Winnona Drive: Like the neighborhood, it was named for the Winn family who settled in the Decatur area in the first half of the 19th century. James J. Winn is described in Vivian Price’s book, The History of DeKalb County , Georgia 1822-1900, as both a surgeon in the Confederate Army and an area clergyman. His children, besides Mrs. George Bucher Scott, whose husband developed Winnona Park, included longtime Decatur resident Mrs. Kate Winn Kirkpatrick and two minister sons, the Reverends Paul P. and Samuel K. Winn.

South Candler Street: The Candler family, for whom South Candler is named, is well known for its civic leaders, including U.S. Rep. Milton A. Candler Sr.; his son, Georgia Senator and Rep. Charles Murphey Candler; and his grandson, Decatur Mayor and DeKalb Commissioner Scott Candler. All lived in homes on South Candler.

Kirk Road: The Kirkwood area of Atlanta southwest of Decatur was named for James H. Kirkpatrick, who came to the area in 1827 and acquired thousands of acres that became one of the largest estates in DeKalb County history. Kirkpatricks also had a 300-acre farm on the present-day Kirk Road , which reportedly included a well-known recreation spot, Kirk’s Spring.

Shadowmoor Drive: Before English style homes were built in the Winnona Heights area and it and nearby streets took English names, Shadowmoor was known as State Street.

East College Avenue (and further down, West College ): This thoroughfare street takes its name from Agnes Scott College , which was established as Decatur Female Academy in 1889, becoming Agnes Scott a year later after the mother of founder George Washington Scott. The street was formerly called either Hampton Street or Railroad Avenue and was reportedly one of 23 Decatur streets listed in an 1877 survey, and the only one south of the railroad tracks.

South Columbia Drive: Originally known as Oak Street in the northern section and Flat Shoals in the southern section, it was renamed after Columbia Seminary relocated there from Columbia , South Carolina , in 1927.

Mimosa Drive and Mimosa Place: These streets off Kirk Road probably derive their names from the avenue of mimosa trees that lined the long drive to the farm of Milton A. Candler.  Milton ‘s family later built the Candler-Clarke House at 146 South Candler, where his granddaughter, Caroline McKinney Clarke, author of The Story of Decatur: 1823-1899, lived all her life.

Sams Street and Sams Crossing: These two streets, located east of Winnona Park, take their names from members of the Augustus Sams family who settled there.

In 2002, the WPNA Zoning and Development Committee undertook the substantial task of filing the necessary applications and back-up documentation necessary to be considered for listing on the National Register of Historic Places. This six month process resulted in Winnona Park being named to the Register, the Federal government’s official list of significant “historic buildings, structures, sites, objects, and districts worthy of preservation.”

This designation carries no restrictions or aesthetic review procedures for modifying or renovating homes in Winnona Park, but rather reminds us of the value of preserving the special character of our neighborhood with thoughtful development. The official Certificate of Designation was framed and presented for display to Winnona Park School in September, 2002..

Do you have information about the history of Winnona Park or memories of growing up in the area? We’d love to hear from you and add your information to our archives. E-mail the Winnona Park Neighborhood Association at communications@winnonapark.org.